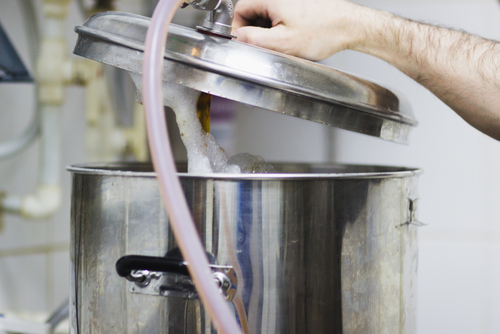 The key to learning how to brew like a pro is a thorough understanding of how beer is made, from grain to glass. On a more basic level, we can cut back on the complicated chemistry and focus on the core principles of what happens at each stage. Rather than just following instructions, you’ll have an understanding of what is happening throughout the brewing process, and how it helps the beer along.

In this second installment of our beginner’s guide to the basics of home brewing, we’ll take a look at the principles of brewing. Understanding what’s going on behind the scenes really helps with troubleshooting if things aren’t working out as you expect them to.

We’ll also pick up some of the unusual jargon used by brewers, such as wort. That one is actually pronounced wert, so you don’t confuse it with what you might find on the end of a witch’s nose!

Let’s take a look at what goes on during the brewing process.

Regardless of the brewing method you use, the basic principles of brewing apply. Sugars derived from malted barley are transformed into alcohol by yeast, creating the alcoholic beverage we know and love as beer. Hops are typically used to add bitterness and aroma, and depending on the style of the beer, other adjuncts such as fruit or seeds may be used to add to the flavor.

Check out our Ingredients guide here…

In all-grain brewing the following brewing process is used. 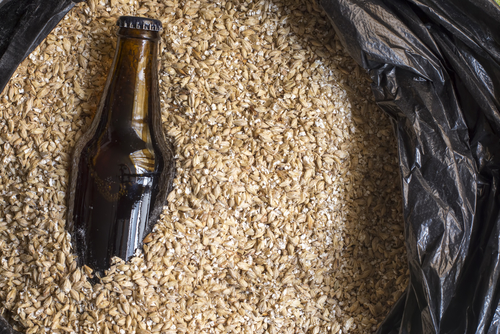 First of all, the malted barley is milled (crushed). Ideally, the grain husks will be split -but left whole in order to create a natural filter bed – while the inside will be cracked. It’s important to mill the malt so that the starches can be readily converted.

Next, the crushed malt is steeped in hot (150°F) water for an hour or so. This is called the mash. During this time, starches in the malt are converted into simple sugars that yeast can later convert into alcohol.

After the mash, the sweet liquid – known as wort – is transferred to the boil kettle. At the same time, additional hot water (170°F) is sprayed onto the top of the grain at the same rate as transfer. This is called the sparge. This process rinses the residual sugars from the grain bed and dilutes the wort to a more desirable gravity. 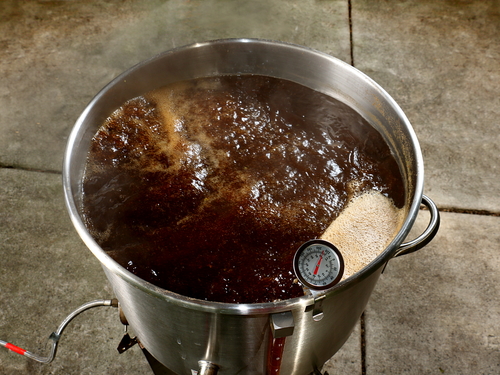 The wort is then boiled for at least 60 minutes in order to drive away any off flavors from the malt proteins. Additionally, hops are added to add bitterness and aroma. Early hop additions provide bitterness, while later additions provide more aroma.

Once the boil is over, the wort must be rapidly chilled. It’s important to lower the temperature quickly to prevent infection. It should be chilled to around 68°F for an ale, or 54°F for a lager. It must be chilled so that the yeast can survive when pitched. There are a number of ways to chill your wort; an ice bath, an immersion chiller or a plate heat exchanger.

Once chilled down to the appropriate temperature, the wort should be transferred to a fermenter. It’s good to introduce as much air and oxygen into the solution as possible. Yeast needs oxygen in order to propagate successfully, so it’s important that enough is introduced at the beginning of fermentation. You can simply stir and splash the wort during the transfer, or inject air or oxygen directly. 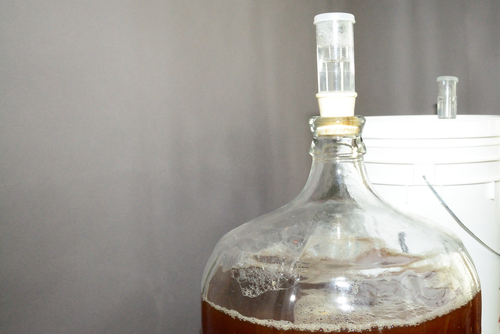 The yeast is then pitched, the fermenter covered with an air tight lid fitted with an airlock, and left for about a week. During this time the yeast will get to work and start converting sugars into alcohol. Depending on the yeast used, you can expect your beer to start fermenting anywhere between 6 to 36 hours. Normally, the first three days of fermentation are the most vigorous, then it relaxes a little!

After a week or so, the yeast will not be able to convert any more sugars, and fermentation is complete. You can check this by taking a hydrometer reading each day until the reading is stable. Your beer can now be matured, conditioned (adding co2) and bottled or kegged, ready for you to enjoy.

In extract brewing the mash and sparge stage is not necessary, as the malt extract has already been through this process, allowing the brewer to start with the boil. Kit beers complete the mash, sparge, boil and chill stages for you, allowing you to simply aerate your wort and pitch the yeast.

See, it’s not so hard to wrap your head around the brewing process once you break it down! With this understanding of how brewing works, you’re a step closer to creating the beers of your dreams. Knowledge is power.

Of course, there’s more to learn about each and every stage. However, while we’ve only covered the basics here, you don’t need to know the full chemistry behind brewing in order to make great beer. This information will certainly get you off to a fantastic start, and many brewers never feel the need to study the process much further.

next
The Basics of Home Brewing: 3 Ways to Brew